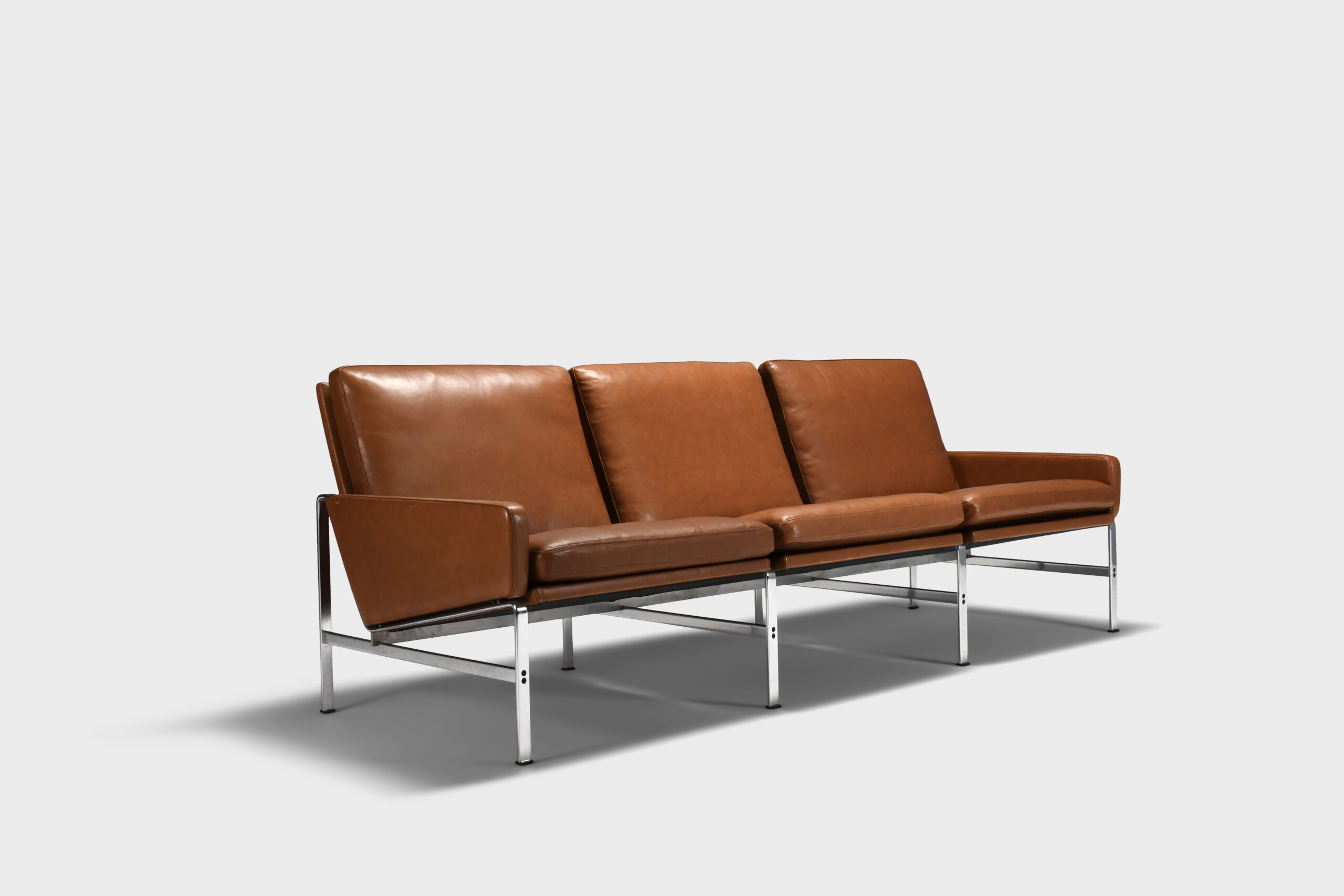 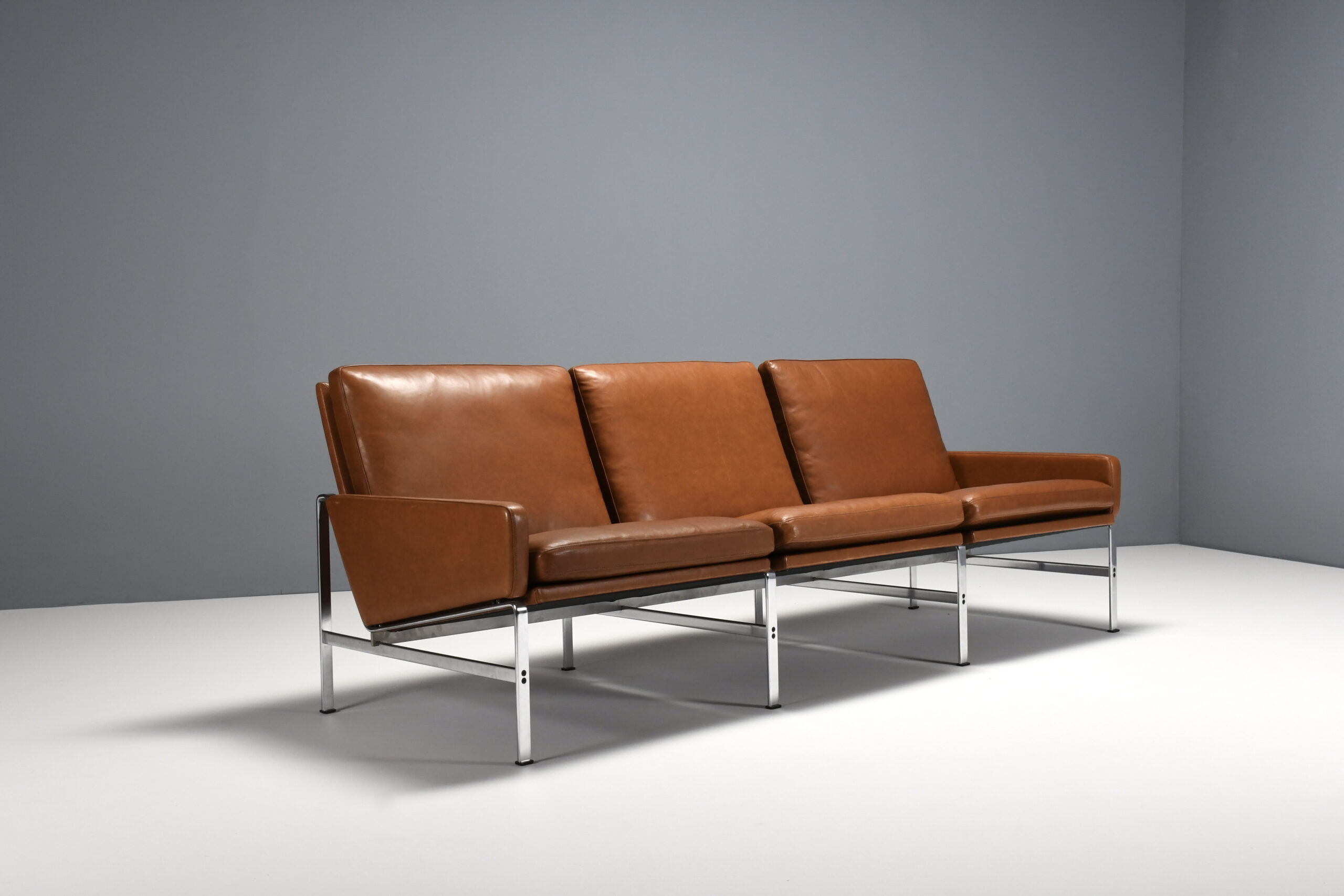 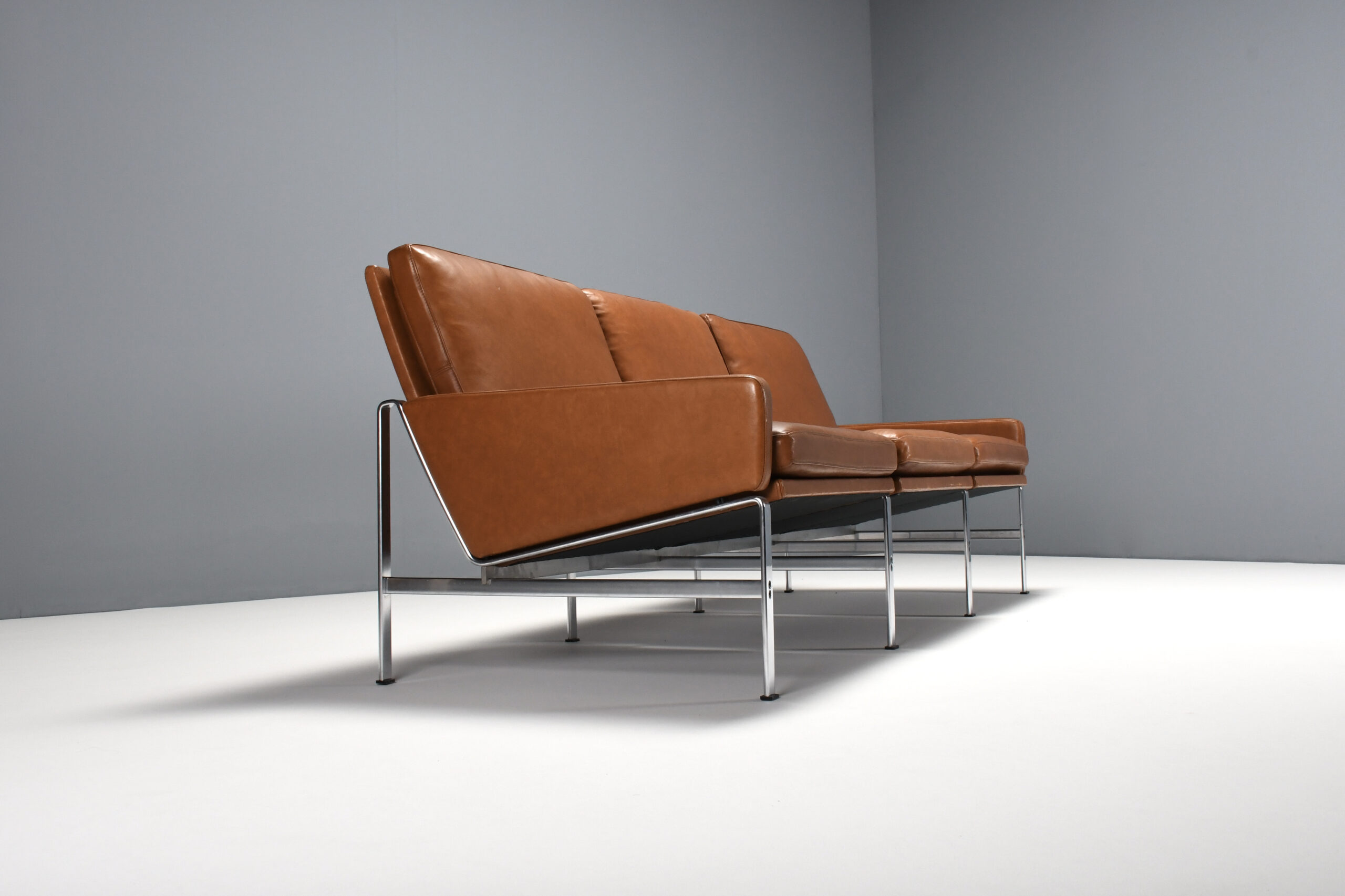 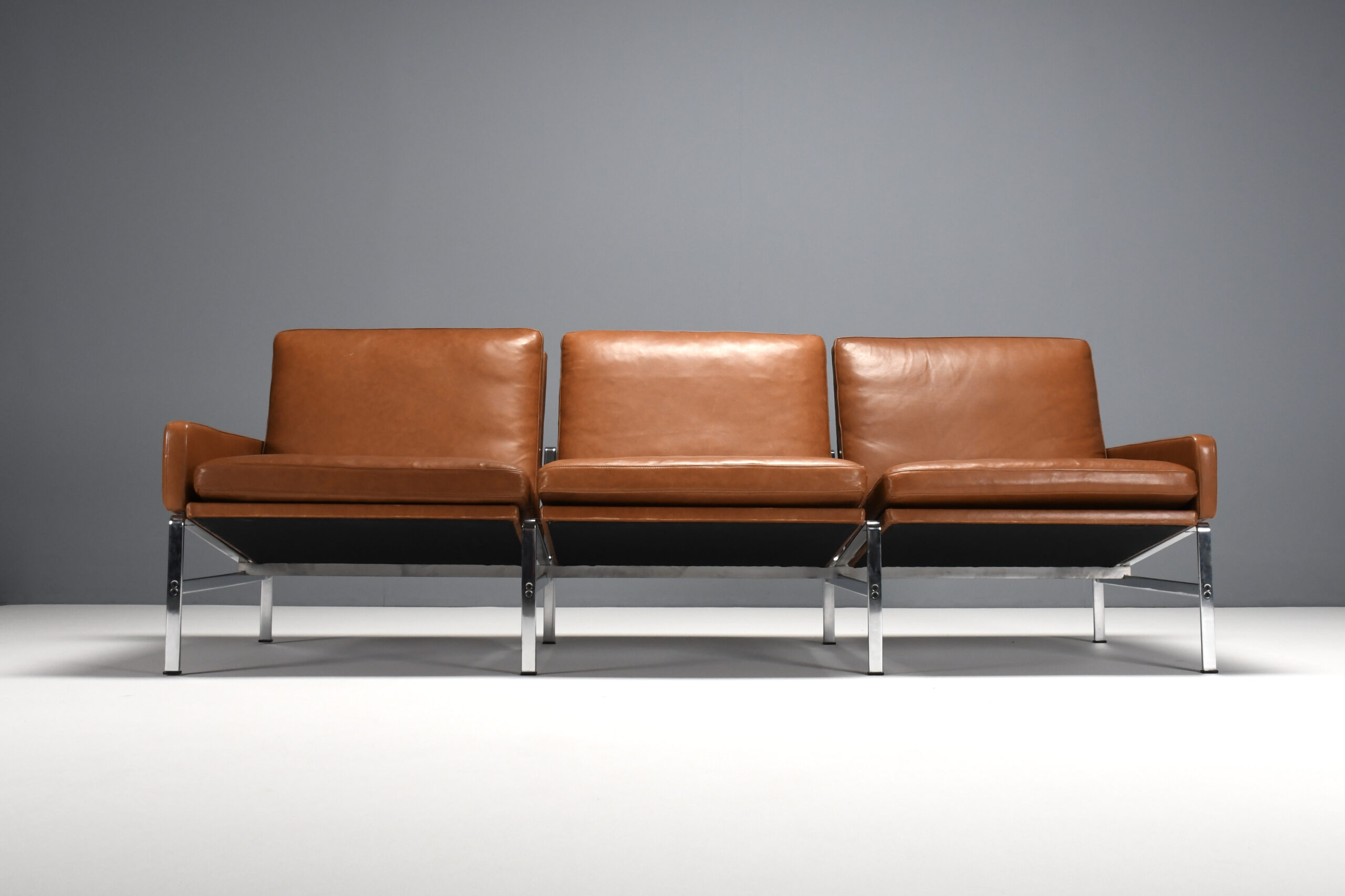 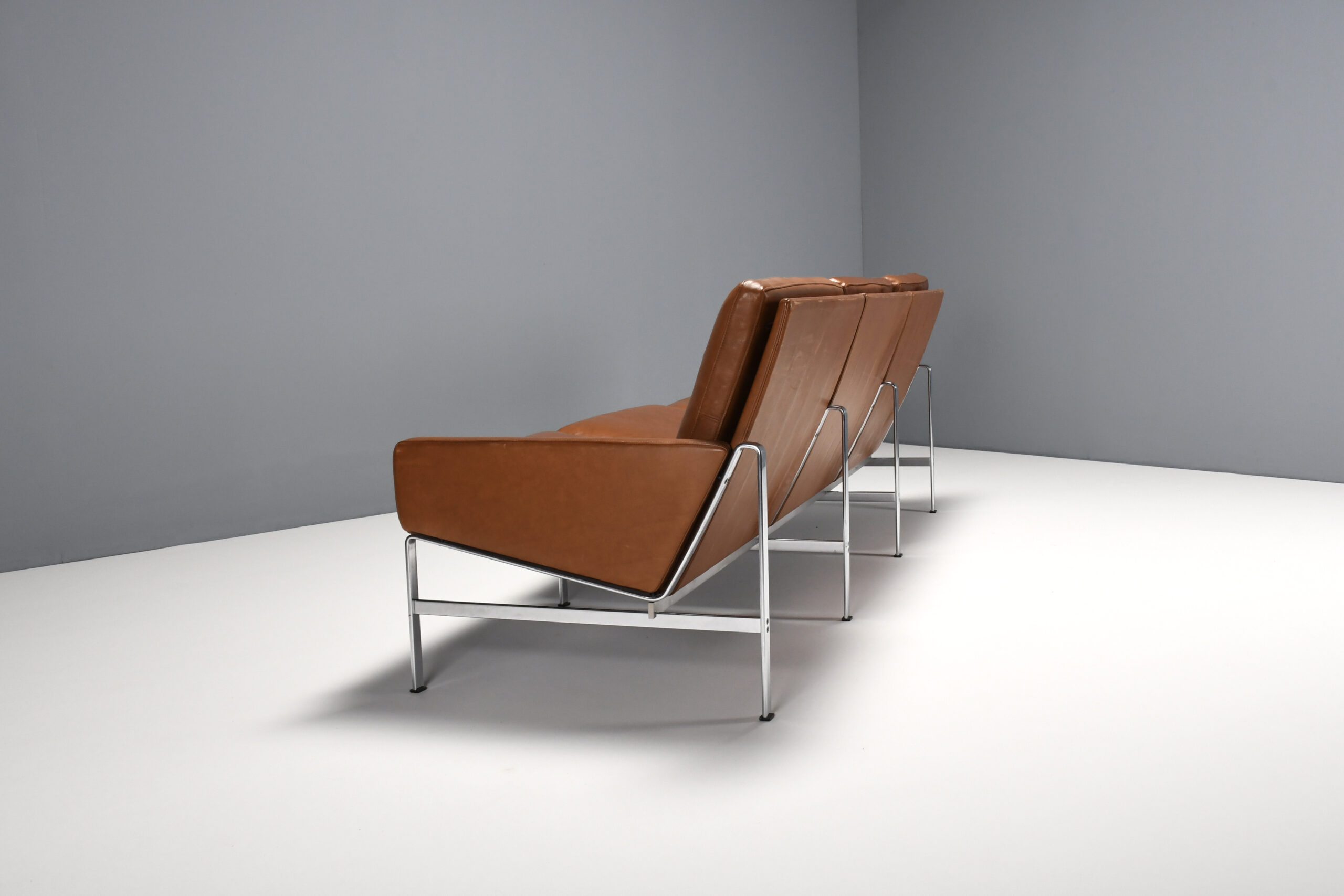 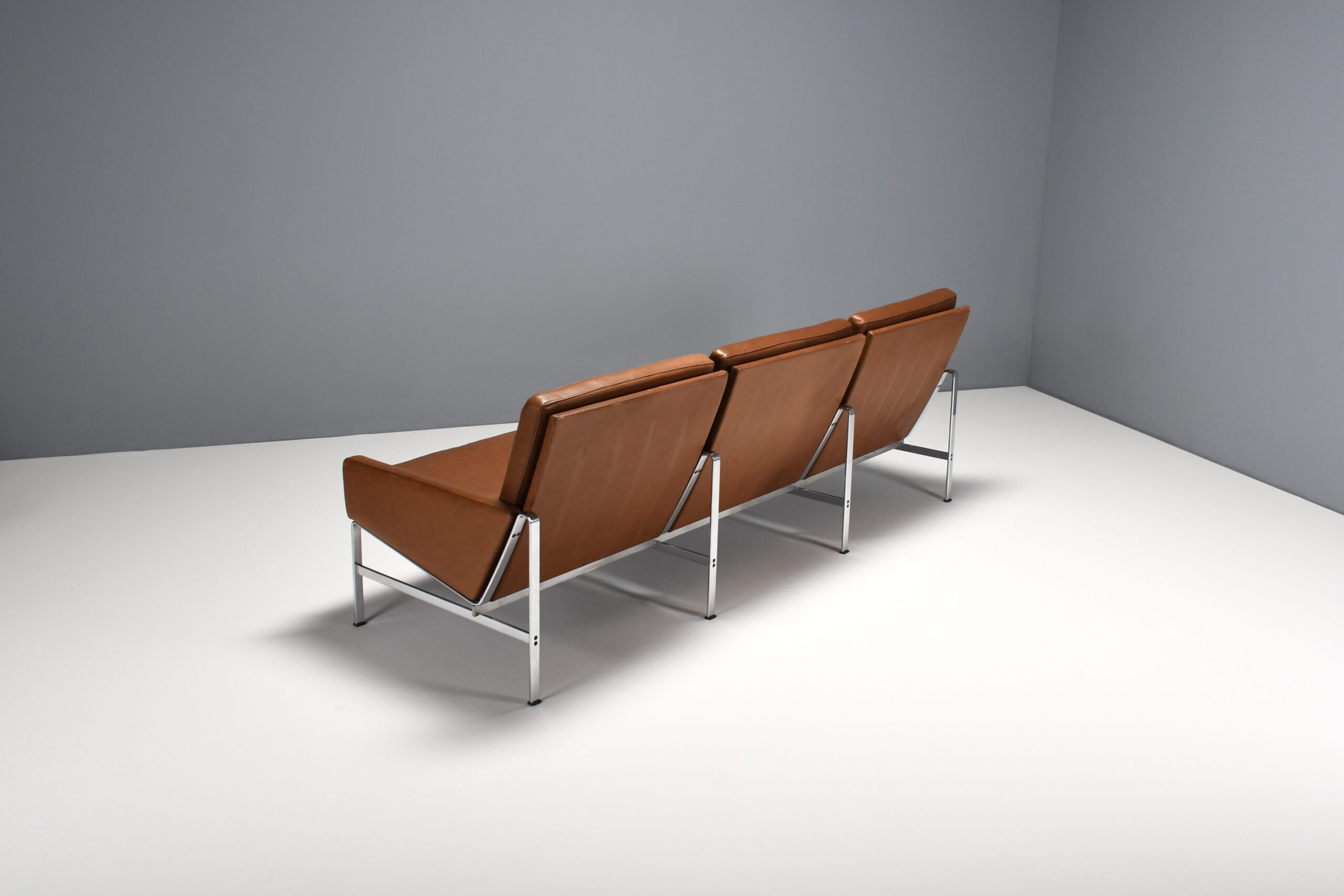 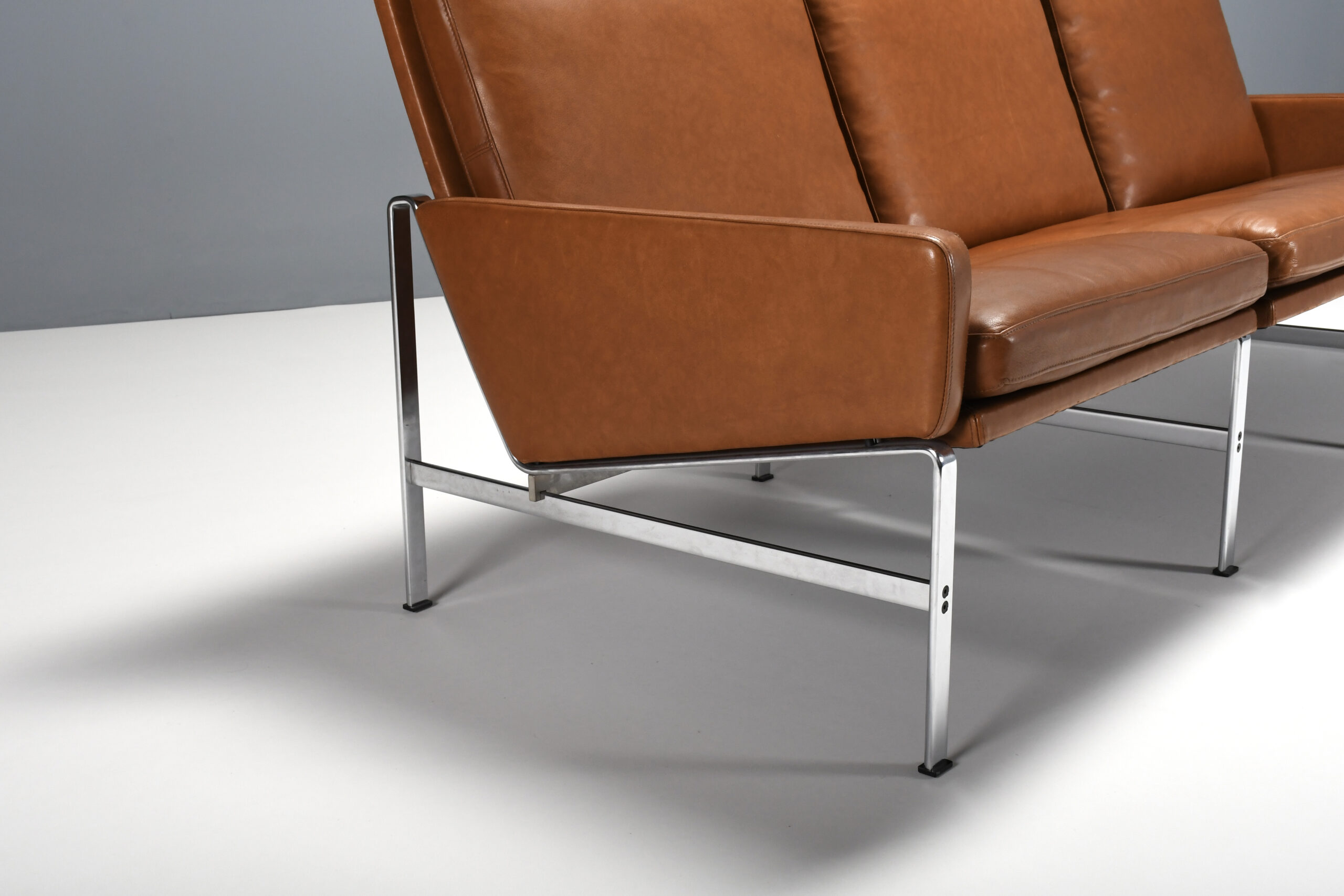 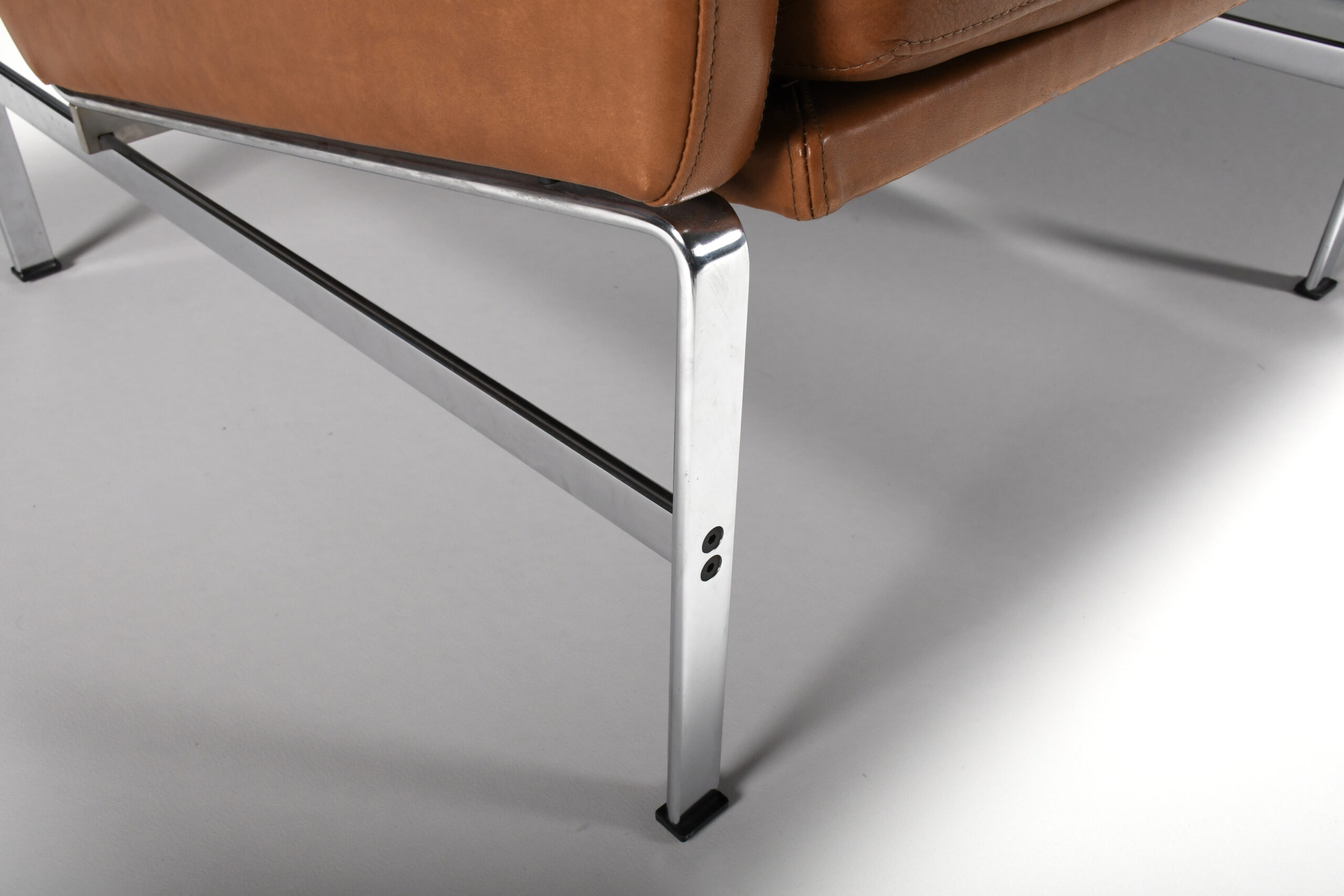 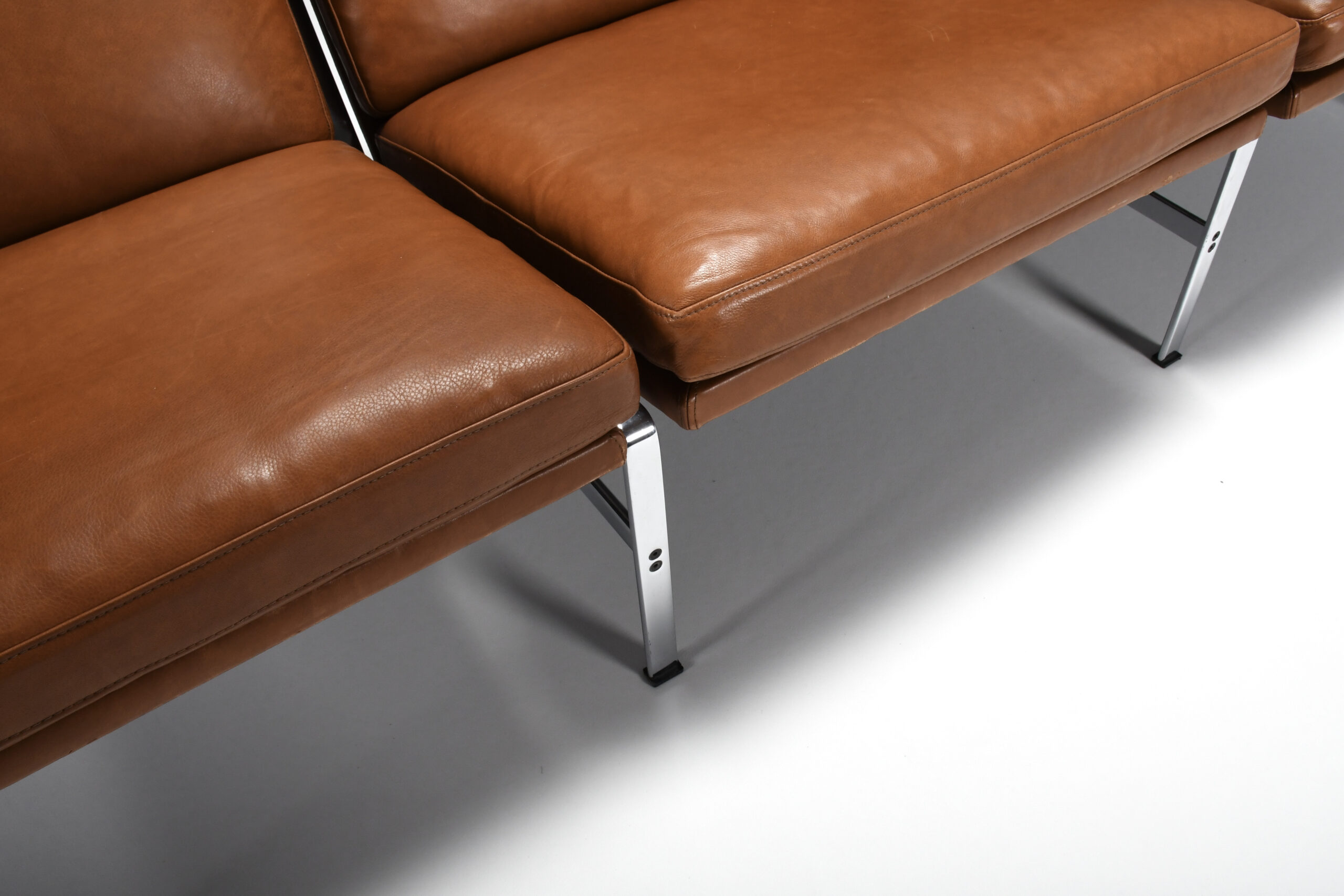 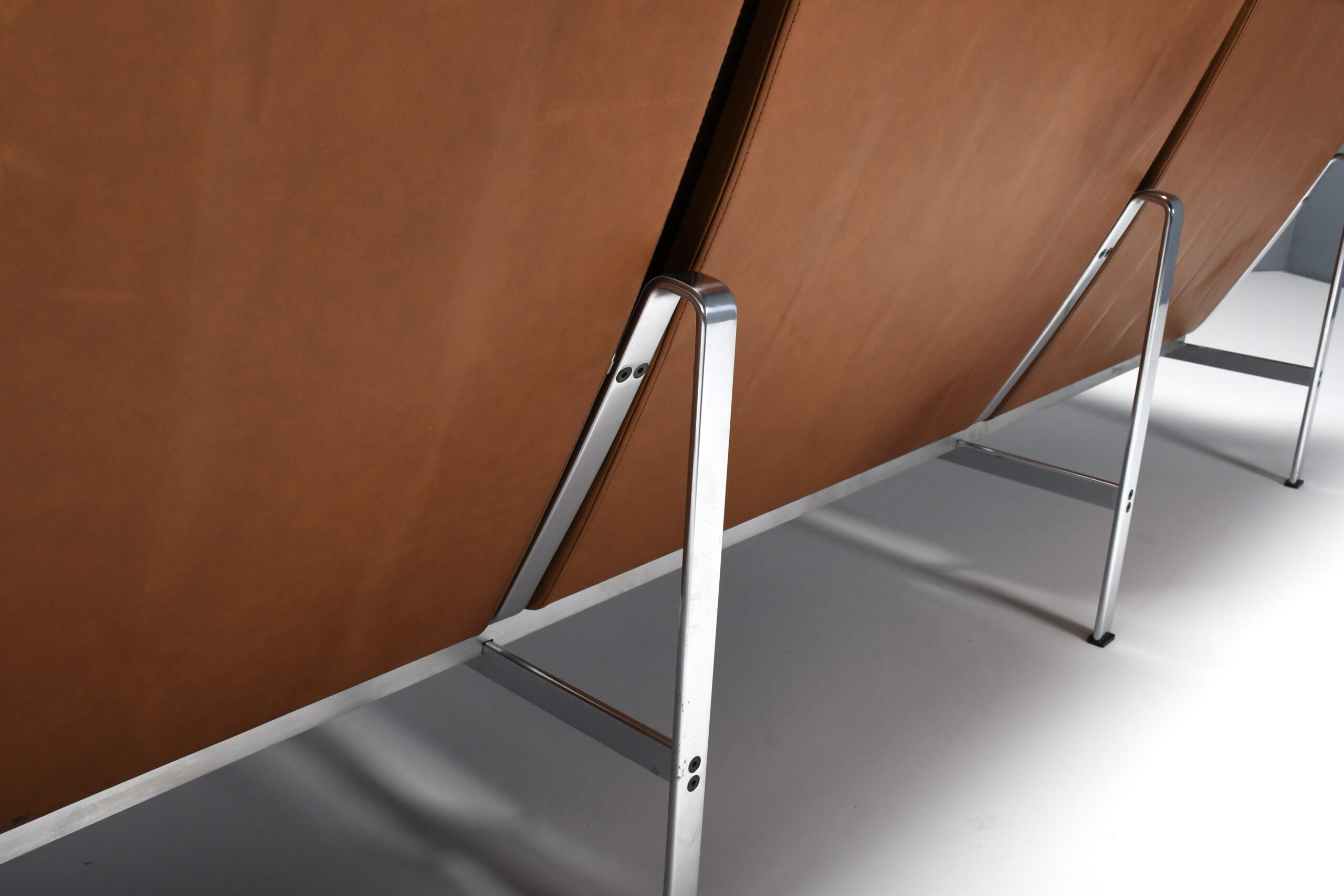 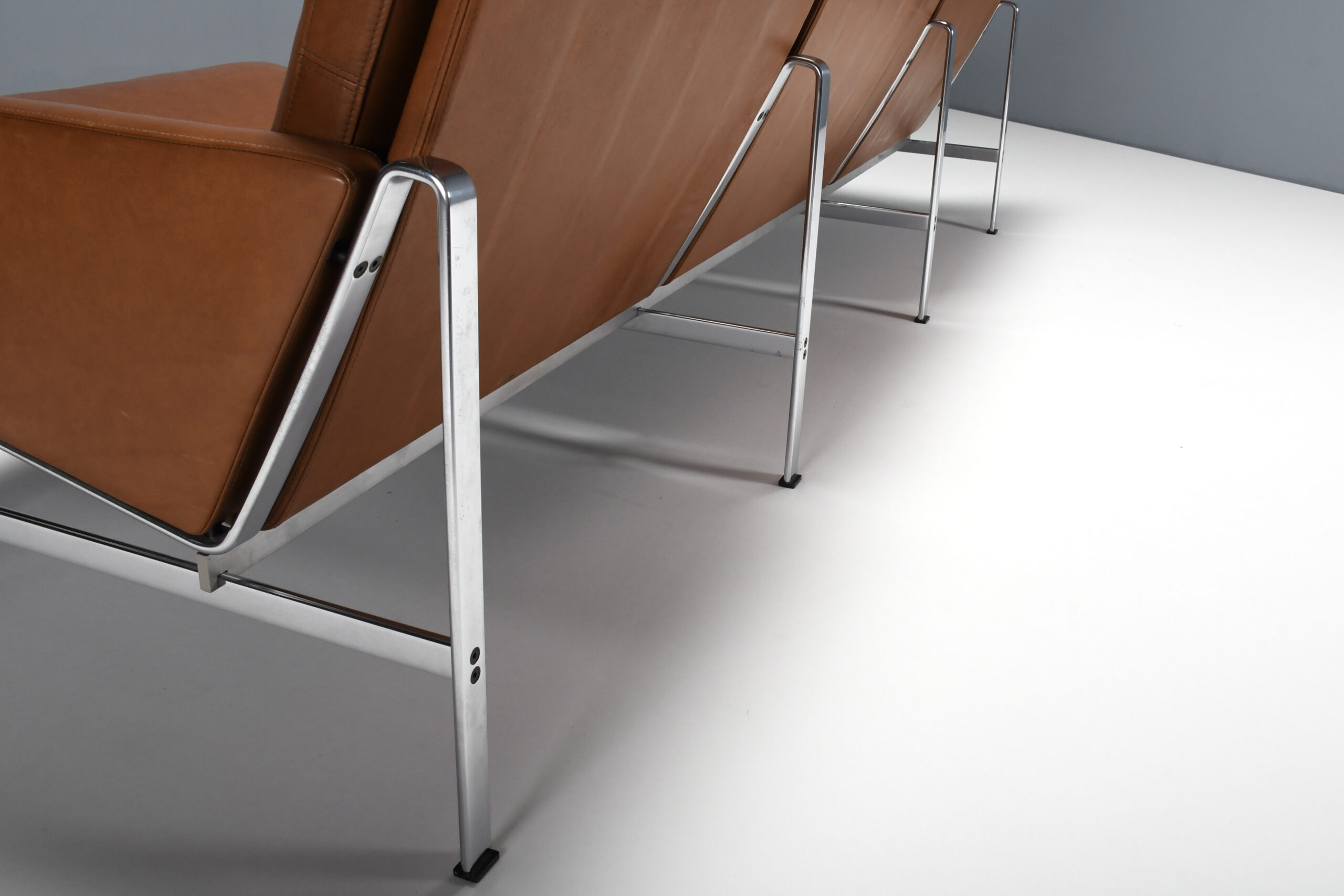 The sofa has a chromed metal base, which is connected with black screws.

It still has the original upholstery, a very high quality aniline leather in a beautiful warm cognac colour.

The leather is extremely soft and and has a very natural look.

This sofa originates from a hotel lobby and almost hasn’t been sat on.

It is in exceptional condition especially for its age.

Very little biographical information is available for German furniture producer Alfred Kill—or his legendary firm Kill International—even though Kill’s collaborations with renowned designers like Preben Fabricius and Jørgen Kastholm resulted in a number of highly successful designs, many of which are now considered to be classics of midcentury modernism.

Sometime in the mid-20th century, Alfred Kill established Kill International in Stuttgart-Fellbach, Germany. It is conjectured that Kill added “International” to the firm’s name in imitation of his extremely successful and popular competitor, Knoll International. And like other companies in the market, such as Walter Knoll and Herman Miller, Kill began to develop collaborations with innovative designers who would create high-end, modernist furniture lines. In the early 1960s, he discovered the work of Kastholm (1931-2007) and Fabricius (1931-1984) at the Fredericia furniture fair. Not keen on having their furniture mass-produced, the duo finally agreed to work with Kill after he promised them total control over production and hefty salaries. This partnership would eventually secure a place for Kastholm and Fabricius, as well as Kill International, in design history.

Kastholm and Fabricius favored a functionalist approach and a minimalist aesthetic, always aimed at simplicity and timelessness. Their lounge chairs and sofas were made almost exclusively in leather and steel—in contrast to many of their contemporaries, who preferred to work with wood. Before the duo parted ways in the late 1960s, they designed numerous pieces for Kill International.