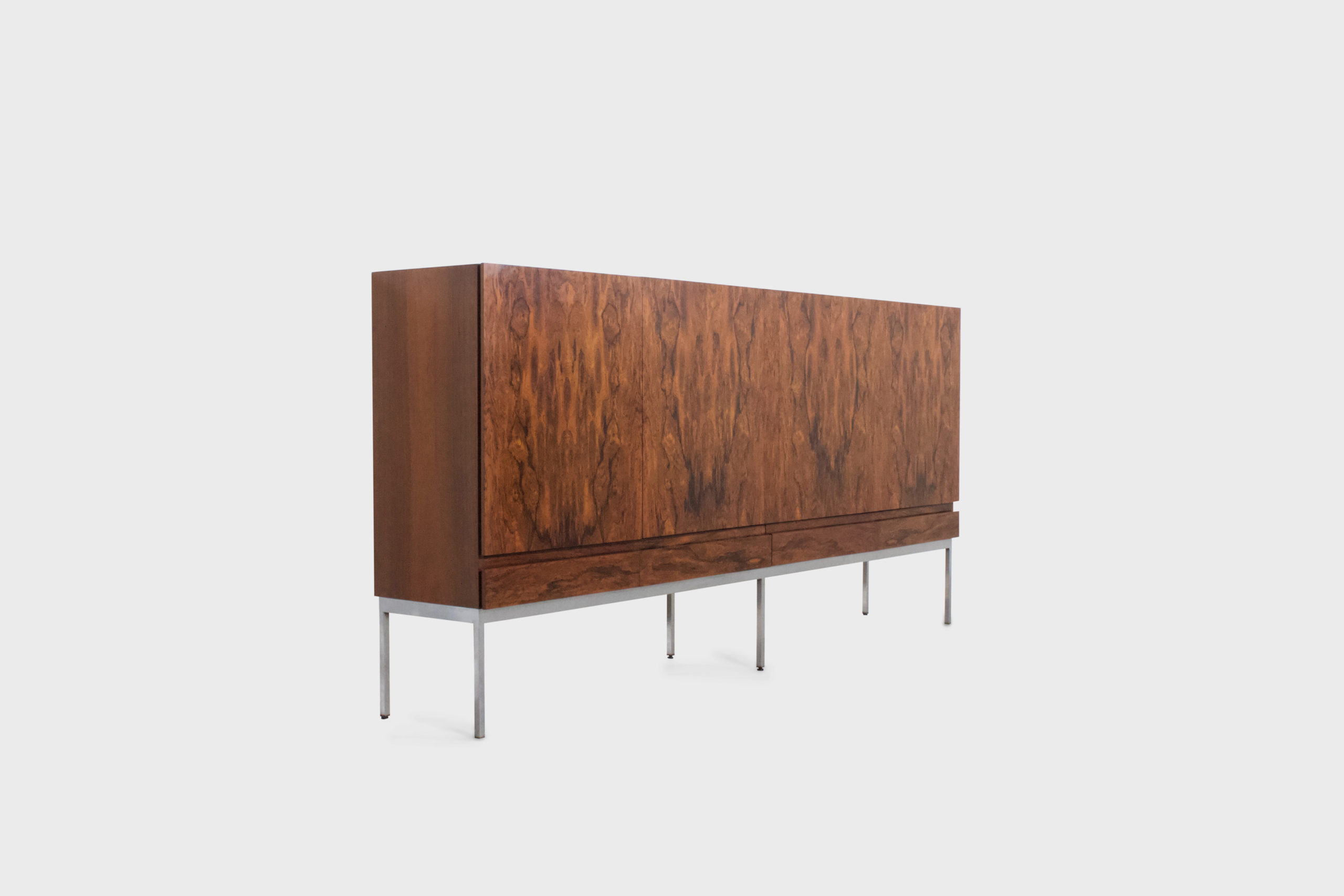 Rio Rosewood B 60 Sideboard / Highboard by Dieter Waeckerlin for Behr

High quality Behr B60 sideboard / highboard in excellent condition.
Designed by Dieter Waeckerlin in the 1960s.

High quality Behr B60 sideboard / highboard in excellent condition. Designed by Dieter Waeckerlin in the 1960s. This rare version is made of a beautiful Rio Rosewood veneer which has a gorgeous grain and color. It has an up to date EU CITES certificate, and we will arrange an international export permit if sold outside of Europe. The inside is covered with a maple veneer which gives a great contrast. The solid base is made of chromed metal. The four large doors and 4 drawers have no handles which gives the sideboard a minimalist character. Inside there is allot of storage space, there are six shelves which can be positioned in various ways. The inside of the right door is marked: Behr Swiss interior and furniture designer Dieter Wäckerlin (1930-2013) is best known for his ultra-reductionist mid-century furniture. Although Wäckerlin’s professional career started in 1950 and lasted nearly three decades, his designs - which are characterized by precise lines - are usually associated with purist tendencies of the 1960s. Born in Basel in 1930, Wäckerlin undertook a carpentry apprenticeship and design internships in Paris before splitting his professional career between his native country and Germany. His earliest, and best-known commercially produced work was for Behr, a furniture manufacturer located in Osnabrück, in the north of Germany. The E-226 Canberra Sideboard (1956), and theB40, B41, and B60 Sideboards (all 1957-58 and part of the multifunctional Buffet Series) were born of the Wäckerlin-Behr collaboration. Over the course of his career, it is believed that Wäckerlin designed over 200 items of furniture, at least 120 of which were put into production. In the 1970s, he opened a design store, stocking brands such as Cassina, B&B Italia, Artemide, Kartell, Flos, and Poltronova, the first in Switzerland to do so. In 1978, Wäckerlin’s collection for Idealheim was acquired by Mobimex, a young Swiss company. One year later, he developed (with Edlef Bandixen) an innovative wooden material, known as Diagonal Massive, that was used to produce tables for Dietiker Möbel, a company who had worked with the designer Willy Guhl. Wäckerlin passed away in 2013. Though relatively unknown in many design circles, Wäcklerin’s oeuvre has recently been discovered by many for the first time, and in 2016, was the subject of an exhibition at the Okay-Art Gallery in Basel, entitled “Dieter Waeckerlin und Idealheim”.